The Battle of Kolubara – My Dad, Volunteer in WWI

Excerpt from “My Dad, Volunteer in WWI”, a memoir in the making.

The previous instalment can be seen here.

While Bogdan worked in Niš, the Serbian Army retreated from Gučevo, the mountain ridge, to the right bank of the Kolubara River. The Battle of Kolubara lasted for a month, from 16 November 1914 when the Austro-Hungarian Army attacked to 15 December when they were beaten by the Serbian Army and forced to withdraw from Serbia.

German publicist Maximilian Harden wrote: “Serbia has risen from its grave on the field of Kosovo. From the source of the Kolubara River it will draw courage for the greatest battles of the whole century.”(Wikipedia)

Why was it possible that an army technically better equipped and more numerous had been beaten by a much smaller army and less sophisticated in military equipment? And many Serb soldiers lacked any uniform other than a standard issue greatcoat.  They wore a traditional Serbian cap known as a “šajkača”, and instead of proper boots, they wore “opanci”, the traditional peasant footwear. My dad was lucky, he had his Austro-Hungarian boots!

Opanci are known as a national symbol of Serbia. I found this one in one of my books. It’s a bookmark. “Opanci” is plural,  “opanak” is singular.

So how did they defeat the Austro-Hungarian Army?

Firstly, the Serb military strategy was superior: the Battle of Cer, the first Allies victory, is studied even today at military academies. Quite remarkable, don’t you think?

And thirdly, they were defending their homeland, their families.

The Austro-Hungarian soldiers, on the other hand, although better equipped, lacked experience and enthusiasm: apart from Hungarians and Austrians, they were mostly Slavs – Czechs, Poles, Slovenes, Croats (and unfortunate Serbs, like my dad) – who were also imbued with Pan-Slavic sentiments and unwilling to fight against Serbs. 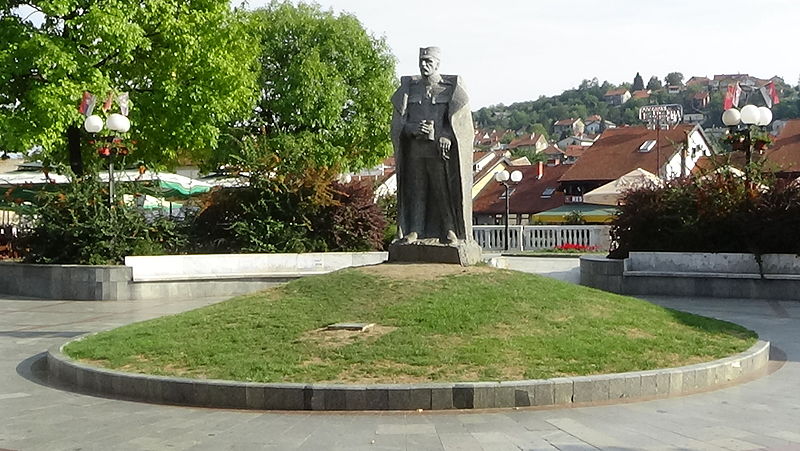 Duke Zivojin Misic’s statue in Valjevo (Wikipedia Commons)
Zivojin Misic was a general of the Serbian first army during the Battle of Kolubara.

The three Serbian victories resulted in the sacking of Austro-Hungarian commander Marshal Oskar Potiorek and in the Allies realising that to win this war they had to help Serbia.

The victories on the front had provided Serbia with ten months of reprieve. But at the same time many infectious diseases were imported with the Austro-Hungarian soldiers. Cholera, dysentery, diphtheria and typhus decimated the population. Typhus was the worst as it often resulted in gangrene, requiring limb amputation. The epidemic spread in December 1914 and reached a climax in February and March 1915. Thus a Russian envoy testified: “In stables on hay and in the fields the dying lie next to the corpses of the dead.” And Dr Archibald Reiss, the forensic scientist from Switzerland, deplored the tragic situations in these terms: “Graveyard diggers are digging graves from sunrise till night.” It is estimated that more than 400.000 people had fallen ill; 100.000 civilians, about 30.000 soldiers and 30.000 prisoners had died. The losses among doctors and medical staff were catastrophic, with one quarter of doctors perishing, according to John Reed, a journalist from the USA.

The much needed aid by the Allies came too late.

Kookaburra sweet, you neither chirp nor tweet. Your laughter is much like mine, my cackle is much like thine. We are two sister souls, one clad in feathers, the other in clothes. ~ Irina ~ I’m a budding blogger. Poetry and photography are my newest passions, living in perfect harmony inspiring each other. I like both free verse and form poetry and am quite proud to let you know that I am the creator of a new form named ‘tercetonine’. Blog Name: Irina's Poetry Corner Blog URL: http://irinadim.com
View all posts by irinadim →
This entry was posted in History, Irina Dimitric, WWI and tagged Bogdan Stojic, General Zivojin Misic, History, Irina Dimitric, memoir, My Dad Volunteer in WWI, opanak, The Battle of Kolubara, typhus epidemic, WWI. Bookmark the permalink.

7 Responses to The Battle of Kolubara – My Dad, Volunteer in WWI