You can read Part 8 here.

‘Noooo!’ She screamed so hard she turned scarlet in her little toddler’s face.

Two grown-ups, her nanny and her dad, were towering over her, insisting that she pick up a piece of bread she had just thrown on the floor. On the Persian carpet… in the living room in Zagreb…

That scene is still vivid in my mind. I can’t remember, though, who won that contest of wills. I remember it only as the first recollection of my existence. I remember I wore a pretty dress Oma bought me, but I don’t know if it was the pink one, the pale blue one or the pale green one. They were all so very pretty. Oma showered us grandkids with gifts. 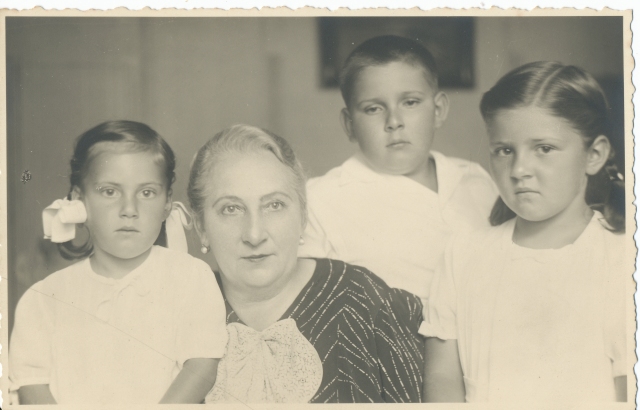 My cousins Seka and Veljko and me with Oma, possibly the last time I saw my dear Oma and my cousins before the war separated us. We all look so serious! That was the photographic fashion of the day, I guess.

Oma and Opa lived in Ljubljana. The following is an excerpt I wrote for my mother’s 100th birthday:

My mother, Maruša, was born into privilige to parents who themselves were not born into privilege. Maruša’s mother, Terezija, was a beautiful and intelligent daughter of a well-to-do Slovenian farmer who had the guts to forbid the master of Mokrice Castle, Baron Gagern, to pass through his property. The same Baron, who was a writer, admired Terezija’s beauty, which he described in his story Die Strasse –The Road. (You can learn more about Baron Friedrich Gagern on Google if you know Slovenian!)

Terezija came to town where she met Toni, a handsome young man who started his career as a waiter to become a rich owner of the prestigious and the most famous Kavarna Evropa , a coffee house in the Viennese style, in the centre of Ljubljana, the capital of Slovenia. He already owned a restaurant in Zidani Most and later bought the popular restaurant Jägerhorn (Lovački Rog) in Zagreb, the capital of Croatia. 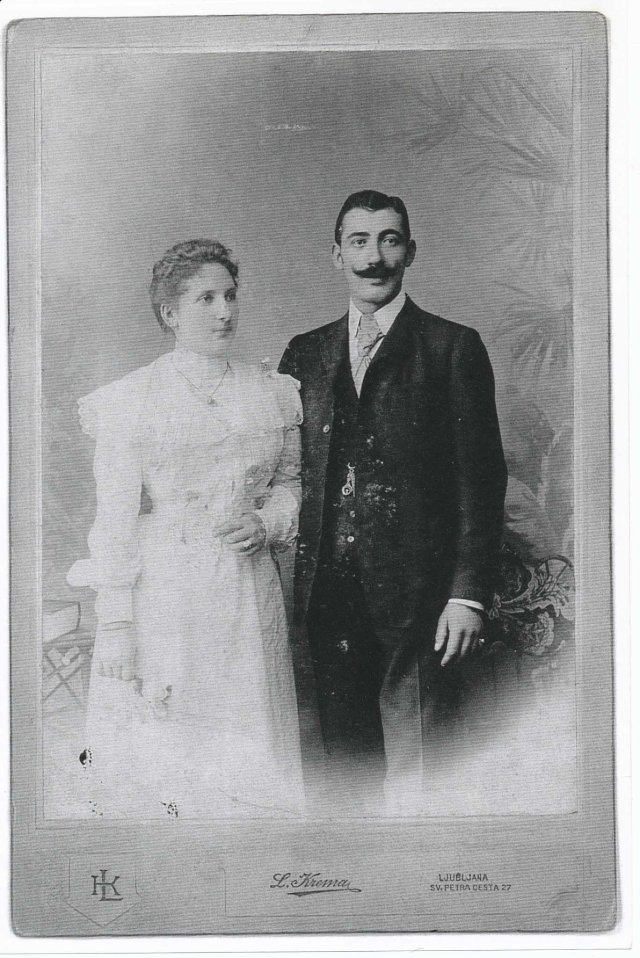 Beautiful Terezija and dashing Tony posing for their engagement photo. He reminds me a bit of Salvador Dali!

Toni and Terezija continued to educate themselves and became highly respected citizens of Ljubljana. They gave their 3 children, Joži, their only son, Silva and Maruša, the best education by also employing French and German speaking governesses and sending teenage Silva and Maruša to a convent school in Italy. 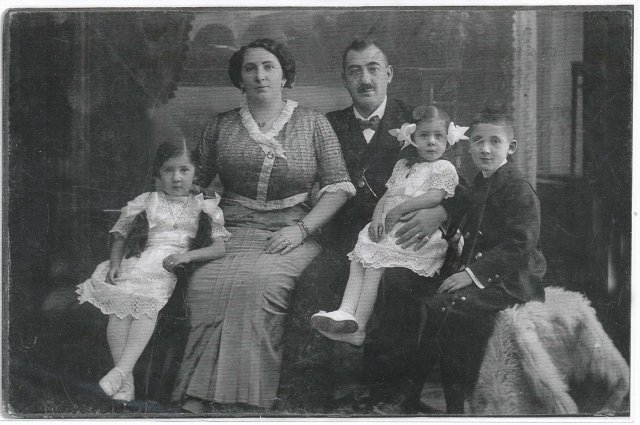 My mother is the little cutie with white ribbons.

Toni was a gregarious man and loved taking his two daughters on holidays to Vienna and Italy. He was also very generous, giving poor students a free meal in his establishments.

Terezija was austere and a shrewd businesswoman. She used to quip in German: ‘Beim lustigen Toni alles um sonst!’ (At merry Toni’s everything is for free!). And yet, she too was happy to provide three free meals, breakfast, lunch and dinner, for 14 – 20 poor students every day.

The family set up a second residence in Zagreb when they had bought Jägerhorn for their son Joži. Maruša and Silva loved their life of luxury in Zagreb. They both married Zagreb gentlemen whom they met at Jägerhorn. Silva married Vladimir Varičak, a young lawyer, the son of the renowned mathematician by the same name, dean of the Zagreb University and Einstein’s friend. Maruša married Bogdan, a young doctor, 18 years her senior.  Bogdan’s salary was modest and Oma loved to buy him elegant suits. At the outbreak of WWII Silva and her family, (she had 2 children by then), went to Ljubljana while Maruša stayed with me in Zagreb, by herself – Bogdan was Hitler’s guest, as he liked to put it, from 1941-1945 in a POW camp.

Kookaburra sweet, you neither chirp nor tweet. Your laughter is much like mine, my cackle is much like thine. We are two sister souls, one clad in feathers, the other in clothes. ~ Irina ~ I’m a budding blogger. Poetry and photography are my newest passions, living in perfect harmony inspiring each other. I like both free verse and form poetry and am quite proud to let you know that I am the creator of a new form named ‘tercetonine’. Blog Name: Irina's Poetry Corner Blog URL: http://irinadim.com
View all posts by irinadim →
This entry was posted in History, memoir, WWII and tagged Baron Friedrich Gagern Mokrice Castle, childhood memories, cousins, family photos, first memories, grandparents, Growing Up In The Forties, historical memoir, Jägerhorn (Lovacki Rog) in Zagreb, Kavarna Evropa in Ljubljana, memoir, Oma and Opa, WWII, WWII memoir. Bookmark the permalink.