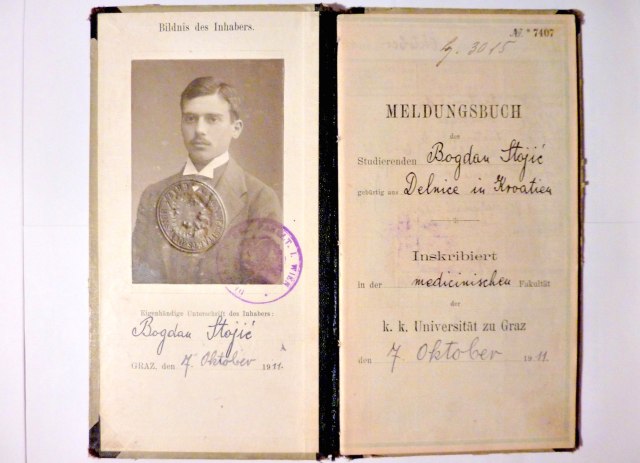 (This is an excerpt from “My Dad, Volunteer in WWI”, a memoir I intend to finish soon).

Dad always remembered the date and what the weather was like. His memory in his late nineties was just amazing.

“Our position was at plate 712 in the mountains of Gučevo, north of Zvornik, over the Drina River. After the attack against Serb positions, I decided to try my luck. There were many killed and wounded. I was with the four stretcher-bearers, about 50 metres behind the frontline. For me this was an opportunity for reconnaissance. I sent two of my stretcher-bearers down into the valley to the completely deserted Serbian village. They found plums in big barrels prepared for making brandy. They found plum brandy too and brought back several flasks. I gave a flask to the sergeant-major. I ate my lunch and then on purpose partially burnt my tent. I changed my underwear, put in my haversack a tin of meat, a tin of condensed milk and the most important thing – white foot wrappings. Then I went to the sergeant-major and said: ‘My tent is burnt. There must be some tents on our killed soldiers who haven’t been buried yet. I’d like to go to the valley and fetch one.” And I went there with the sergeant. The distance between our and Serbian trenches was about 400 metres, and between them there was a valley with huge beech trees. We passed four dead barefooted Austro-Hungarian soldiers. I later noticed that Serbian soldiers were wearing Austro-Hungarian boots! The sergeant stopped to pee by a tree, so I quickened my step and when I lost sight of him, I took out of my haversack one white foot wrapping, fixed it to a twig and started to climb in the direction of the Serbian trenches. I soon spotted a Serbian soldier on guard. I thought he might shoot me, but he didn’t. And in a few minutes I found myself in a Serbian trench.”

Dad was so overwhelmed to be among Serb soldiers that he burst into tears and couldn’t stop crying. “They kept asking me: ‘Did the Švaba kill your family?’ And I couldn’t even answer their questions – tears were choking me. When I calmed down, I said: ‘No, none of my family has been harmed. I’m just so happy to be here with you.’ I suppose I was also glad to be alive.”

In Dad’s eyes sparkled diamonds that almost became tears. For a moment I pictured him as he was then: so very young at twenty-one, so patriotic and brave with those white foot wrappings ready in his haversack.

“And then, what happened then?” I asked.

“I’m ready to fight on the frontline,” Dad told them. “Well, we can’t decide that, son. You must go to the headquarters,” he was told. When the Commander heard he was a third-year medical student, he said: “You are worth to us more than ten soldiers.”

And they sent him to serve in the military hospital in Niš, 180 kilometres south of Belgrade.

Bogdan’s defection from the Austro-Hungarian army took place during the Battle of Drina, the second victory of the Serbian army over the Austro-Hungarian army, and about a month after the Battle of Cer, the first victory of the Allies, which occurred after the first Austro-Hungarian invasion when Belgrade came under heavy artillery bombardment and the country was ravaged, houses burned, wells poisoned, and unspeakable atrocities committed against civilians, young and old, women and children as well. The ailing King Peter, riddled with arthritis, walking with great difficulty and with a grieving heart, made his way to the troops on the frontline and to boost their morale addressed them with these words: “Heroes, you have taken two oaths: one to me, your King, and one to your country. From the first I release you, from the second no man can release you. But if you decide to return to your homes and if we should be victorious, you shall not be made to suffer.” (p. 582 Black Lamb and Grey Falcon by Rebecca West, Canongate Classics 1993)

They all stayed and went on to prepare for a counter attack – the Battle of Cer in August, followed by the Battle of Drina in October.

Kookaburra sweet, you neither chirp nor tweet. Your laughter is much like mine, my cackle is much like thine. We are two sister souls, one clad in feathers, the other in clothes. ~ Irina ~ I’m a budding blogger. Poetry and photography are my newest passions, living in perfect harmony inspiring each other. I like both free verse and form poetry and am quite proud to let you know that I am the creator of a new form named ‘tercetonine’. Blog Name: Irina's Poetry Corner Blog URL: http://irinadim.com
View all posts by irinadim →
This entry was posted in History, Irina Dimitric, WWI and tagged Bogdan Stojic, History, Irina Dimitric, memoir, My Dad Volunteer in WWI, Serbia in WWI, story, volunteering in WWI, war, wartime story, WWI. Bookmark the permalink.