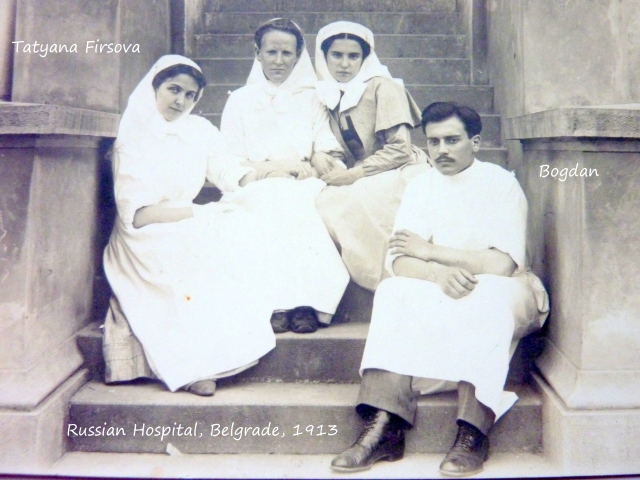 Bogdan Stojić, medical student at Graz University, was conscripted into the Austro-Hungarian Army at the end of June 1914.

After Bogdan’s defection from the Austro-Hungarian Army on 4th October, during the Battle of Drina, he was sent to serve in the military hospital in Niš, 180 km south of Belgrade.

Although he would have preferred to be engaged in battles on the frontline, he was pleased to work in a hospital, set up in the cavalry barracks.

No doubt his thoughts would now wander to Tatyana Firsova from time to time. He would remember the Russian hospital in Belgrade where he was volunteering right after the Second Balkan War from July to October 1913. As soon as the war broke out, he opted to sit for the half-yearly exam early so as to be able to join the war effort. He went to Belgrade with his parents’ blessings and the Austrian passport in which his reason for travel was ‘study’, not war! But by the time he arrived in Belgrade, the war between Serbia and Bulgaria had ended, with Serbia being victorious and with a great number of injured soldiers needing medical care.

Bogdan’s knowledge of the Russian language was pretty elementary at the time, and he worried how he would get along.

“There’s nothing to worry about. Russian is easy. Just speak Serbian. All you have to do is put on a Russian accent”, his mates told him.

Thus reassured, he ventured one day to pay a compliment to the pretty damsel on her lovely rosy cheeks. As a soon as he had uttered the last word, Tatyana’s cheeks turned deep red, her eyes filled with horror and she fled the scene along with all the other horrified young ladies.

My God, what did he say to provoke such a violent reaction? Was it unladylike for a distinguished young Russian lady to accept a man’s compliment?

Soon after Dr. Grinenko, the chief surgeon, summoned him to his office. Luckily, he knew some Serbian, which proved to be very helpful.

“Bogdan Ivanović, what was it you said to Tatyana Firsova? She is most upset. And so are all the nurses.”

“I’m so sorry. I didn’t mean to upset her. I just wanted to pay her a compliment. I told her she had beautiful, rosy cheeks.”

“Precisely, Bogdan Ivanović, you did pay her a compliment, but not on her rosy cheeks. You told her she had lovely rosy buttocks.”

When he told me this story, Dad looked both embarrassed and amused. He kept shaking his head in disbelief; I could see that he was transported back there, reliving the agony of the embarrassing moment.

“You see, in Serbian ‘jagodica’ means ‘cheek’ and in Russian it means ‘buttock’, as I learnt there and then to my utter horror.”

“Did she forgive you?” I asked.

“Yes, of course. We remained good friends. But from then on I was very careful with Russian words.”

Kookaburra sweet, you neither chirp nor tweet. Your laughter is much like mine, my cackle is much like thine. We are two sister souls, one clad in feathers, the other in clothes. ~ Irina ~ I’m a budding blogger. Poetry and photography are my newest passions, living in perfect harmony inspiring each other. I like both free verse and form poetry and am quite proud to let you know that I am the creator of a new form named ‘tercetonine’. Blog Name: Irina's Poetry Corner Blog URL: http://irinadim.com
View all posts by irinadim →
This entry was posted in Humour, Irina Dimitric, Story, WWI and tagged Bogdan Stojic, Friday Writing Essential, humour, language pitfalls, My Dad Volunteer in WWI, story, wartime romance, wartime story, WWI, youthful memories. Bookmark the permalink.