This year we are celebrating the 70th Anniversary of the end of World War Two. It was such a long time ago. I’m trying to remember what it was like for me in those turbulent years of War, and what it was like for my father as a POW in Germany. It will be part of our Family History. From time to time I might post an extract on my blog. It’s a work in progress. So here is Part 2.

You can read Part 1 here, if you wish.

My only two cousins left for Ljubljana in Slovenia to stay with our grandparents. It was safer for their family there. Yugoslavia was falling apart under the onslaught of the Axis: Slovenia, south of the Sava River, came under Italian occupation while the Nazis ruled in my neck of the woods, helped by home-grown collaborators. My mother and I sought refuge on our friend’s farm in Bregana, on the border of Slovenia and Croatia, not far from Zagreb. It was safer for us there, too, in those turbulent first days of occupation. We stayed in Bregana for three months.

Meanwhile, my dad, a doctor and lieutenant-colonel in reserve was captured in Bosnia by the Germans on 15 of April 1941 and transported in cattle trucks with other POWs to Germany. My mother must have given a sigh of relief when she received in November his first letter and a photo from Teschen in Upper Silesia, now Tešin in the Czech Republic. 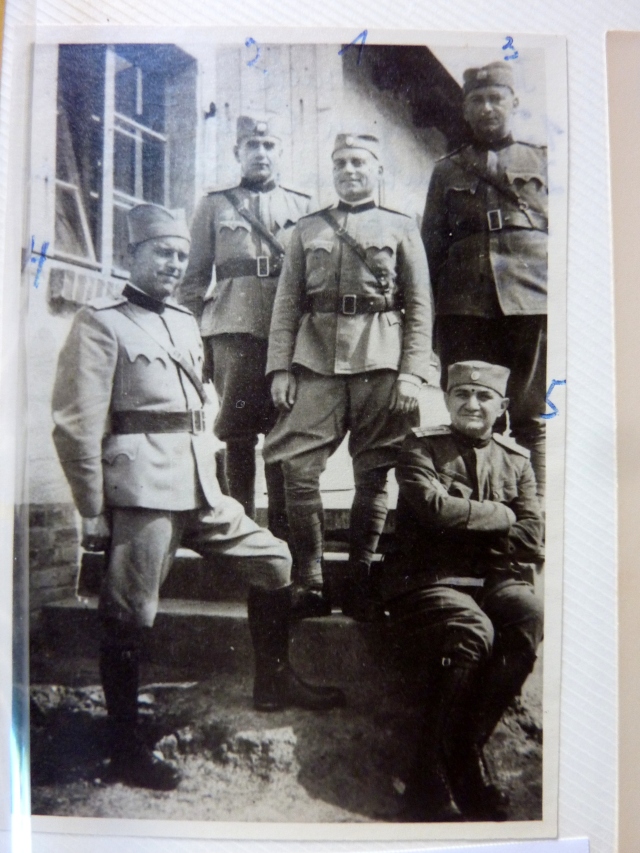 My father is in the middle

The first two years of occupation were relatively peaceful both in my hometown and in Bregana on the farm. I started primary school in 1942. It was run by Catholic nuns. I liked my school. I was a good, obedient pupil, and I adored our teacher, Sister Irma. She had a sweet smile and loved me, too, I think because I was a very devout little girl.

I’m the girl with dark plaits in front of Sister Irma, on the right.

Wasn’t Sister Irma pretty? She was young, with a freckled face and when she smiled, I thought she looked like an angel. I wanted to be like her. I wanted to become a nun. A teaching nun, just like Sister Irma. But ballet came in the way. I went to ballet classes with my best friend, Ines. The two of us would become inseparable. We both loved ballet and often performed together.  I was happiest in the ballet class. Even happier on stage. In my first performance I was one of the little chickens in Mussorgsky’s ‘Pictures at the Exhibition’. Our teacher, Ana Maletić, ran the best school of modern ballet in Zagreb in Mesnička Street and was a marvellous choreographer. All her students, the very young, like me, and older girls, took part in all ballet performances.  For this particular “tableau”, the ‘Ballet of the Unhatched Chicks’, she envisaged the little chicks all in yellow, with yellow socks, so we were asked to dye a pair of white socks ‘little-chick yellow’. But our mothers, Ines’ and mine, objected: they were not prepared to ruin a pair of white socks we needed for school. Oh, how embarrassed we both felt? And disappointed.  The other mothers were quite willing to go ahead with the dying, but our mothers were adamant, not willing to change their position. Well, it was decided then that all the little chicks would dance barefoot, which we didn’t mind at all. Mother Hen was an older student. When the curtain went up Mother Hen stood in the middle of the stage, dressed in a large crinoline of feathers under which we, the little chicks, were hiding. Slowly and cautiously the first chick  appeared; then the second one, and the third, and so on until all six hatched one by one and were out dancing in a circle around Mother Hen’s crinoline.  Then she taught us how to look for worms in the ground, so we scratched the ground with our bare little chicken feet. Next, she taught us how to use our wings to fly, but at the sight of an eagle, she called us back to hide under her feathers. Oh, what delightful fun! I can still dance parts of the routine. But I need the music.

And here is the original piano version. Embedding was disabled by request, but I’m including the link because we danced to the piano version, played by the very talented Mr Marasovic, our regular pianist.

Many performances followed. In a German tale for children ‘Der Struwwelpeter’, ‘Stockhead Peter’ or ‘Janko Raščupanko’ in Croatian, I was a comb and Ines was a bar of soap. And another friend, Vesna Kobelja, was a cat. In our ballet class we had to learn each other’s roles and, of course, I still remember some of the steps.  The greatest thrill and pleasure was to dance on stage. I never had the slightest stage fright. I knew my steps well and looked forward to appearing from behind the curtain to perform. When I was the comb and finished my dance hopping into the “drawer” behind the curtain, Ana Maletić was there with a beaming face; she hugged me and kissed me on the cheek, and I knew that I did well.

In ‘Petrica Kerempuh’, based on ‘The Ballads of Petrica Kerempuh’ by Croatian writer Miroslav Krleža, I was a little girl playing with my brother, a girl who was of stronger build than me. We followed our mother, a poor peasant, throwing an apple to each other as we danced, which was a bit tricky, but we managed to finish our dance without dropping our “ball”.

The performances were staged in The Little Theatre, as it was called then, in Frankopanska Sreet. Today it bears the name of the Croatian theatre director, critic and essayist Branko Gavella – Gavella Drama Theatre, opposite the church where I worshipped with the nuns and lovely Sister Irma. Ines and I loved pretending to be nuns and teachers. I had a little altar in my room with the figure of the Virgin Mary, and whenever I passed by, I would genuflect and cross myself.

‘So which way will I go?  Will I be a nun or a dancer?’  I was torn between those two vocations.

Kookaburra sweet, you neither chirp nor tweet. Your laughter is much like mine, my cackle is much like thine. We are two sister souls, one clad in feathers, the other in clothes. ~ Irina ~ I’m a budding blogger. Poetry and photography are my newest passions, living in perfect harmony inspiring each other. I like both free verse and form poetry and am quite proud to let you know that I am the creator of a new form named ‘tercetonine’. Blog Name: Irina's Poetry Corner Blog URL: http://irinadim.com
View all posts by irinadim →
This entry was posted in Story, WWII and tagged ballet classes, catholic primary school, Growing Up In The Forties, Mussorgsky - Pictures at an Exhibition, WWII, Zagreb. Bookmark the permalink.