You can read the beginning of this story here.

In the camp hospital Dad did his best to sabotage the enemy by keeping healthy men in hospital under false diagnoses. This is how he describes it:

“In my surgical ward 90% of patients were healthy men. The German chief surgeon, a major from Breslau, was very kind to the prisoners. He not only turned a blind eye to my machinations but told me one day that according to an agreement all French prisoners who were sick could be repatriated. He asked me to examine them and compile a list of all the sick men.”

In Sydney, Australia, I noted down this story in a notebook as Dad was telling me about his days in captivity. He was in his nineties, and I wanted to record his experiences for posterity.

As a lieutenant-colonel in reserve, Dr Bogdan Stojic was mobilised into the Yugoslav Army and appointed commander of the 44th Division Field Hospital on 2 April 1941. He was captured by the Germans at Doboj in Bosnia on 15 April and transported in cattle trucks with other prisoners to a POW camp at Lamsdorf, now known by its Polish name Lambinowice, for 4 months. There he was allotted a dog tag Stalag VIIIB/19522 and lost 10kg on a very meagre prisoneres’ diet. In September, he was transferred to Stalag VIIID Teschen, now Český Těšín in the Czech Reublic. My mother must have given a sigh of relief when she received his first letter in November.

I’ll let him now speak in his own words:

‘Today I’ll tell you how during the war, in captivity in Germany, I had helped repatriate 250 French prisoners.

I was arrested on 15 April 1941 at Doboj. The Germans loaded us on a truck to the Drina, then to Šabac, from Šabac to Mitrovica where we spent Easter in Mitrovica prison, and then in cattle trucks to Germany. First to Lamsdorf, near Opola, where the Opel car factory is. We were there four months. I got my doggie tag there. Stalag VIII B/19522. No name. Just a number.

Then we were sent to Teschen, a town on the border of Czechoslovakia and Poland on the Czech side, and Poland is on the other side of a little river.

There were a few hundred Poles and Serbs there. All the Croats were released and sent home in November. Four Serbs declared they would go home with the Croats. I knew one of them personally, we went to school together in Novi Sad. I gave him a piece of my mind. Coward!

There were 600 Frenchmen, most of them warrant officers, and among them 50 Catholic priests, all intelligent men, high school teachers. And one day, the Oberarzt, a major by rank, a very fine gentleman, came to me and told me to draw up a list of all the French prisoners who were sick so that they could be sent home.

I went to the Frenchmen with the good news. They were all healthy, young men in their twenties and thirties, not more than 40 years old. They received parcels from home every Friday, and from the Red Cross as well. Every Friday I went to their barracks, and they gave me lots of biscuits which I then took to the Russian barracks because the Russians didn’t receive any food parcels from anyone. The Frenchmen were all healthy, none of them was ill. And I told them that I could help them be repatriated, but because they were healthy, I would have to teach them a few things: “Come to my room, about ten of you each day, with a pen and a piece of paper, and I’ll teach you the symptoms of your illness: duodenal ulcer, angina, malaria, sciatica… You’ll learn the symptoms by heart so that you can answer with confidence when interrogated by the Germans.”

At first, they didn’t trust me. There were spies among the prisoners. One had to be careful. But then they came and noted down their symptoms. The odd thing was that they were not examined by a German doctor, my report seemed to suffice. One day, they were just put on the train and sent home to France, about 250 of them. Among them was the gentleman you visited in Nice, René Williaume. He was a librarian in the camp library.

Then,  about two months later, the Oberartzt was discharged, the doctor who told me to draw up that list. He received that list and didn’t interview anyone, just let them go… a very good man…both his sons were killed, both doctors… one on the Russian front, the other in Egypt…he cried when he was telling me this. He was in his sixties… I decided there and then to give him a parcel with chocolate, cocoa, and cigarettes for his wife,  he didn’t smoke. And I told the Frenchmen: “Look, tomorrow that German doctor will come, and I will walk with him in front of my room. You can go into my room so that nobody will see you and you can watch how I will give him the parcel.” And the Frenchmen watched how he accepted the parcel because it wasn’t bribery. It was a token of gratitude and sympathy.’

Gratitude was expressed by the grateful French prisoners as well. They invited Dad to a banquet on 26 April 1942. I’m not quite sure whether the delicacies on the menu were served in reality. But the sense of humour was as vital as food. 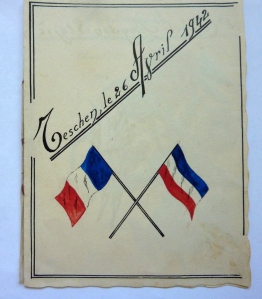 Look at that superb artwork! 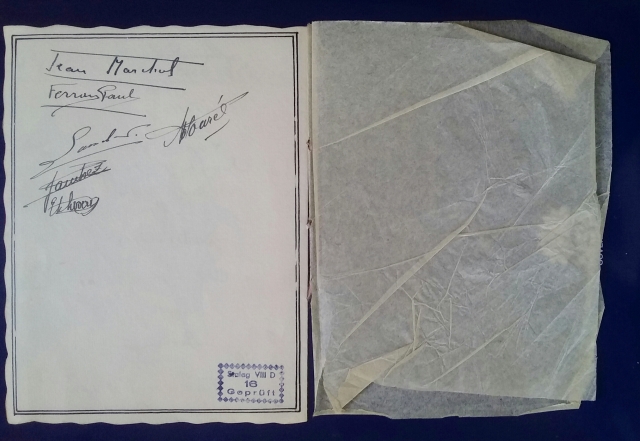 The card is 16/12 cm and protected with tissue paper tied with a golden string. I wonder which signature is that of the artist?

While the lucky Frenchmen went home to France, one of the Frenchmen from Teschen wrote to his mates in another Arbeitskommand to feign illness, to come to Teschen where a Serb doctor would help them get repatriated. The Gestapo intercepted that letter, the kind Oberartzt was immediately dismissed and Dad put in prison on 4 July 1942, accused of trying to stage an insurrection in the camp and being an open enemy of Grossdeutschland. This would have grave consequences for Dad.

The kind German Oberarzt most probably ended up on the Russian front.

Kookaburra sweet, you neither chirp nor tweet. Your laughter is much like mine, my cackle is much like thine. We are two sister souls, one clad in feathers, the other in clothes. ~ Irina ~ I’m a budding blogger. Poetry and photography are my newest passions, living in perfect harmony inspiring each other. I like both free verse and form poetry and am quite proud to let you know that I am the creator of a new form named ‘tercetonine’. Blog Name: Irina's Poetry Corner Blog URL: http://irinadim.com
View all posts by irinadim →
This entry was posted in History, Story, WWII and tagged Dr Bogdan Stojic, French prisoners, Germany in WWII, Growing Up In The Forties, historical memoir, History, In Captivity, Irina Dimitric, kind German Oberarzt, memoir, memories, photos, POW in Germany in WWII, Stalag VIIIB/344 LAMSDORF PRISONERS OF WAR, Stalag VIIID TESCHEN, wartime story, WWII, WWII memoir. Bookmark the permalink.