I’m glad that Dad’s whole story in captivity is told in a short biography for Hadouch’s Lamsdorf-Lambinowice museum in Poland. In this new post I’ve added a few details

You can read Part 6 here.

‘The food rations were pretty meagre the first six weeks when we arrived in Germany. It was a bit better when we arrived in Teschen. We received parcels from the Red Cross and from private people from France. I received two parcels during all my time in Teschen, which was one year. We also received parcels from our Yugoslav government in Cairo, parcels of about 40 kg, with dried figs, dates, coffee, all kinds of tins. One of the prisoners, a Jew from Sarajevo, was working at the post office. He peeled off the label with the address and contents from one of these parcels and then brought the parcel to me. The parcel was almost empty. That wasn’t right, I thought. These provisions were needed by our patients in the first place. I then went to the barracks, through the door on the other side of the fence, and I wanted to call up a meeting to explain the situation about the parcels, that “I know about them, we never received them, I need them first for my patients, and then for you as well. I will go and see the Commandant to complain and ask some questions.” My intention was to let the prisoners know about this situation.

But when I arrived at the barracks, someone had already alerted the Command, a spy, our representative, a Slovenian: “Dr Stojić is at the barracks with the soldiers. He wants to talk about something.” A German sergeant rushed to the scene, but I saw him coming first and I quickly hid in the French barracks from where I was watching how they were looking for me.

After ten to fifteen minutes I stepped out and another sergeant came up to me and asked me what kind of meeting I wanted to call. “I only wanted to talk about some parcels,” I said. That was the reason they used to then accuse me of trying to mount an insurrection in the camp.’

‘They already resented you because of the 250 Frenchmen you helped repatriate, and also because you reprimanded a Serb who went home under a new name, a Croatian name,’ I reminded him.

‘Yes, yes…But not only that. One day, while I was still examining and teaching those Frenchmen, the Germans took me for a walk to a village in Poland, five to six kilometres from the camp. Crossing a little river, we entered Poland. ‘ 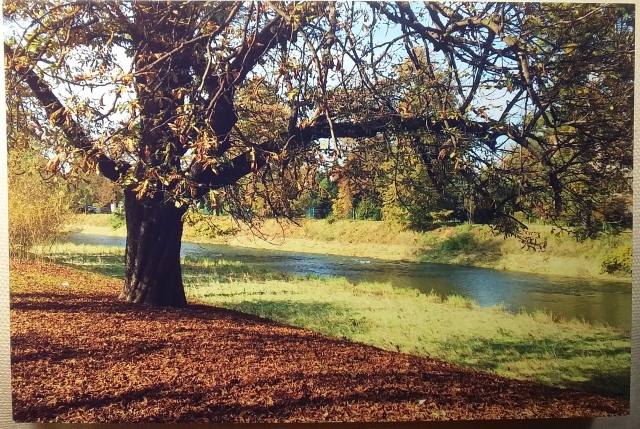 Photo credit:  Dr Tom Atkins. Tom’s father was also a doctor and a POW in Germany and worked in the same hospital at Cosel as my father. We got in touch through Facebook as Tom was searching to contact the descendants of his father’s POW mates. When he was visiting the Lamsdorf  POW camp site, he made a special trip to Teschen because of my father and brought me photos and brochures, for which I’m eternally grateful.

It was spring when Dad was taken for a walk across that little river.

‘My mate, Kačanski, was with me, a lawyer by profession, a sergeant in wartime. He went to Amerika after the war…During that walk, the Germans tried to persuade me to come to Germany, to work in a German military hospital. They would also let me conduct private practice and would allow my family, my wife and daughter to join me. Needless to stress, I didn’t need to think it over. I said: “I can’t accept your offer. There are so many sick prisoners in our camp, I need to look after them.” And I couldn’t help adding: “Besides, you’re going to lose this war as you did the first.” Obviously, my rejection of their generous offer and my last remark didn’t sit well with them, and they started to plot their revenge.

A month later I was arrested. It was 4 June 1942. 4th of June, when my mother passed away. I was locked up in my room, the camp prison was full. Locked up for ten days, not allowed outside at all.

When I was being taken for the first hearing, the sergeant escorting me was very rude to me, and another officer joined him yelling at me insults, a Hungarian I had looked after when he was sick. Both great admirers of Hitler. The Gestapo then charged me with mounting an insurrection in the camp.

A few days later, a Division judge from Katowice arrived to hear my case. The German guards came to escort me to the courtroom, and on my way there, the prisoners looked on and chanted “Long live Dr Stojić!” That wasn’t going to be very helpful, I thought. But Judge Jelinek, of Czech origin, a lawyer from Vienna in peacetime, was very polite. Whenever I said something that would go against me, he did not note it down.

Before Judge Jelinek appeared, I was taken into the room by a captain, a highs-school teacher who was not a Hitler sympathiser, now a judge in the army. A very fine gentleman. As soon as I entered the room, I saw a young woman sitting at a table with a typewriter. She was crying and shaking. The kind captain took her out of the room, and when he had returned, he gave me the document in which the Gestapo charged me with a grave offence against the Third Reich. Article 104. Execution by shooting. That was what the young woman saw. She was so scared that she couldn’t type.’

And how did my dad feel when he saw the death sentence? What was going through his mind? Why didn’t I ask him those questions when he was telling me this story?

‘After that incident, Judge Jelinek did not require a secretary to keep the minutes. He said he would note down everything himself. He then asked me about my education and my medical degree. I told him I graduated from Vienna University.

“And where did you go to high school?” he asked.

“Was Dr Savić who was against you also from Novi Sad?”

“No, he was from Bosnia, but in Novi Sad lived another Savić, the director of Matica Srpska, whose daughter studied in Vienna.”

When I told him that her father went to high school with my father, and that I remember her, he became even kinder towards me. He then went to the Commandant of the camp to hand in his report, and I was immediately released. Judge Jelinek exonerated me from all the accusations brought against me by the Gestapo. However, the Gestapo wasn’t very pleased and being higher in the hierarchy, a few days later, they sent me to a Russian camp as punishment. I was there, near Breslau, for six months.’

Kookaburra sweet, you neither chirp nor tweet. Your laughter is much like mine, my cackle is much like thine. We are two sister souls, one clad in feathers, the other in clothes. ~ Irina ~ I’m a budding blogger. Poetry and photography are my newest passions, living in perfect harmony inspiring each other. I like both free verse and form poetry and am quite proud to let you know that I am the creator of a new form named ‘tercetonine’. Blog Name: Irina's Poetry Corner Blog URL: http://irinadim.com
View all posts by irinadim →
This entry was posted in History, Story, WWII and tagged Dr Bogdan Stojic, Food parcels for POWs, Germany in WWII, historical memoir, History, Irina Dimitric, memoir, memories, POW in Germany in WWII, POW mates, Stalag VIIID TESCHEN, The Gestapo, WWII memoir. Bookmark the permalink.